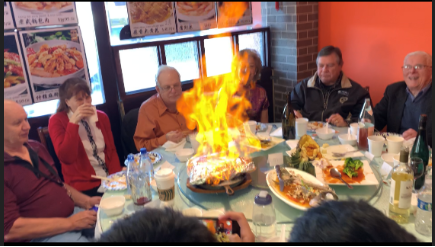 Fully 40 club members gathered in Milpitas, CA, at the “Perfect Chinese Food” restaurant on Saturday, January 22, to devour ten, fabulous and elegantly presented and previously undisclosed courses of Chinese cuisine that completely lived up to the restaurant’s moniker.

John and proprietor, Mr. Lee had agreed that Mr. Lee would serve high-end, surprise selections both from their huge and profusely illustrated menu, and dishes that are so intricate and so time consuming to prepare that they are off-menu delights. The restaurant is a culinary preserve of authentic Chinese food, so many of the dishes were brand new to a majority of club members.

Multiple dishes were presented in dramatic manner. One, a cascade of delicious shrimp with pineapple chunks spewing forth from a pineapple hull, certainly visually punctuated the entire cornucopia we enjoyed.

The feast built from a spiced appetizer, and next progressed through an excellent beef-tofu soup. These were followed by a parade of selections, including string-wrapped tender pork and an entire steamed fish. John visited each club table to show all of us how to position the fish in a swimming position, so that the filet could be gently separated – bone-free – to be served to everyone at the table. It was quite a good trick to learn for banquets to come! And, the fish was dreamingly wonderful.

A crisply prepared and crunchy Mongolian beef brought a new dimension to that specialty. Mr. Lee’s kitchen by this point was really on a roll. And his very polite and proficient servers – led by the delightful Sunny – continued their fine service and then brought to each table a foil-wrapped package resting on an iron skillet. Then with flare and showmanship as shown in the photos, those dishes were flamed. Of course, this was carefully managed, so no eyebrows were singed. When the piping hot foil was opened, we were treated to excellent Kung Pao Chicken.

Each course was beautifully presented, and that continued as the main course was revealed: Ginger Seasoned Lobsters. Those plates emerged with sectioned lobsters floating on a most delightful sauce and festooned with a parrot intricately carved from carrots. A great treat.

But the feast had not ended. A first desert of Sesame Red Bean balls was enjoyed.

Alas, after all these courses, time had marched on, and we all had to, as well. We all got a few minutes to review the fine event as John got us together for the Club photos. In all, this was a fine Saturday activity. Many thanks to John for putting it together and to Eugene for providing the second desert. – David Albin 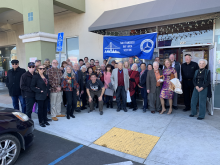 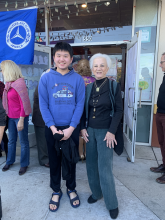 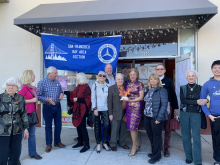 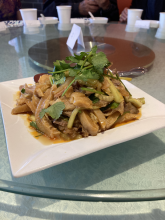 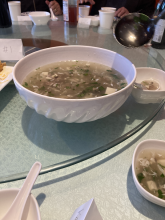 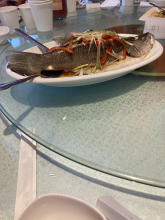 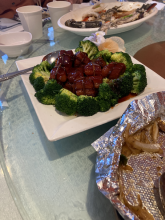 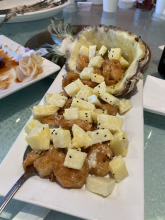 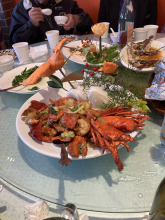 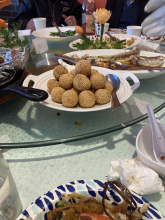